DeWitt Learning Commons, built in 2013, appreciates two generations of the DeWitt family for the generous gifts which made the building possible: 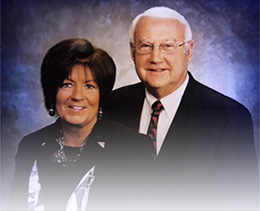 The name of the Jack and Mary DeWitt Learning Commons gratefully recognizes the DeWitts' many years of leadership, encouragement, philanthropy, and service to Northwestern College. A food service industry entrepreneur, Jack served in a variety of roles at one of the largest turkey processors in the country, Bil-Mar Foods of Zeeland, Michigan. He started Request Foods as a prepared-entrees division of Bil-Mar. When Bil-Mar was sold to Sara Lee in 1988, a group of investors led by Jack DeWitt purchased the division and launched Request Foods in Holland, Michigan, where it has been offering world-class prepared entree and skillet meals since 1990. Under Jack's leadership, Request Foods aims to nurture the God-given talents of their employees and others who come into contact with the Christ-oriented company.

Jack and Mary have demonstrated exceptional support for the mission of Northwestern College. Jack faithfully served Northwestern as a member of the Board of Trustees from 1987-1995 and 1998-2003. The DeWitt family has given faithfully and generously to build facilities and fund student scholarships. Northwestern College is humbly grateful for Jack and Mary's investment in our Christian academic community and the Kingdom we seek to serve.

Marvin served on the Board of Trustees from 1978 to 1987. In 1988, Northwestern awarded him an honorary doctorate. Marvin and his brother Bill grew Bil-Mar Foods from a small, family-owned business into one of the largest turkey processors in the nation. As strong supporters of Christian higher education, Marvin and Jerene have encouraged their whole family to support and promote the kind of faith-infused learning that Northwestern College provides.

Northwestern College is humbly grateful to Jack and Mary DeWitt and Marvin and Jerene DeWitt for the investment in our Christian academic community and the Kingdom we seek to serve.